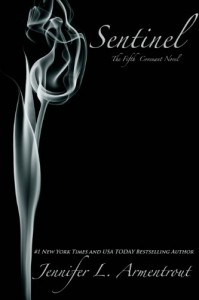 Trying to write my review directly after finishing Jennifer L. Armentrout’s Sentinel is probably not the wisest idea, but I wanted to get my thoughts, however random and convoluted, down whilst they’re still fresh in my mind.

I always worry about series’ I’ve followed. Especially if the series has been a consistent 4/5 star rating for each book as I’ve gone along. Often, with a series, the ratings usually start off lower and the last couple of books blow me away after watching the development of the author’s writing and plot-weaving abilities, and I tend to get nervous when the 5 star ratings come early on in the series, because I wonder where the books can go from there. They surely can’t go up. They’re already at the top. So then I can only worry about them going down. And when you’ve invested your time, heart and emotions in the first four books (+ novellas) of a 5 book series, it is majorly important to the reader for that final book to beright. To leave you feeling as though the closure is there, but without depressing or angering you on the inside. To be able to walk away with reassurance that everything is going to be okay for the characters without it feeling contrite.

Well, I’m actually kind of wowed by how fulfillingly Sentinel ticked all the boxes for me.

From the moment I opened the first page, to the very end, I was riveted. Yes, I read the book slowly and took my time. It was a personal order to myself; because at the very end of a series, whilst you might be eager to see how it all comes to together, you’re also not quite ready to part with the people inside the story that has managed to capture your attention for so long. Yet, not once did I feel bored or disconnected from the story, or … okay, let’s just cut to the quick here and say I truly don’t think I have a negative comment to add to this review anywhere. So, I shall just concentrate on the good.

Alex. I never disliked her from the off. I know a lot of readers can get majorly irked by attitudal up-‘emselves characters, but I didn’t feel that way with Alex. She has been a GREAT leading lady from the very beginning, and she remains that way until the very end.

Aiden. He’s just Aiden, and I’m not sure I can, or even need to, expand on that. Sure, sometimes his love and devotion to Alex might seem saccharine sweet, but for some reason it suited him rather than makes the reader want to barf. Because he’s just Aiden. And possibly the first guy with an inane sweetness v fierceness about him to this level that I’ve still managed to adore.

Seth. *insert big grinny face* I loved Seth from the off. I LOVED Seth in Pure. I Got irked at him in Deity. I wanted to punch his lights out by the time we got to Apollyon. Yet the entire time my feelings toward him altered, I still argued with the Seth-haters that Seth is redeemable, and that I hoped he would prove himself in the end. [warning: spoiler about to follow] Well, he does. And not just on the level we’re watching unfold, but he redeems himself when needed, and THEN SOME! Still, thanks to all the naysayers, and to my overly-suspicious mind wondering how he could be so freaking altered from one book to the next (despite his explanation and remorse shown over what happened to Alex), I spent almost the entire leading-up-to-the-finale time disbelieving he would ‘behave’. So, as you can imagine, I had a mighty big grin on my face when he did what had to be done and I pretty much fell for my Sethy-baby all over again.[spoiler end]

Now, I’m not going to go on a big ramble about every other character in the book, because I’ve covered the most important ones. Though, I will just quickly slip in how much I love Apollo in this book, and how much I’ve adored him throughout the series. But, anyway, some quick words on the plot, hopefully with as few spoilers as possible. The plot in this one is awesome. It’s pretty much what we’ve all been waiting for. It’s the stuff we’ve all be anticipating, and hoping it will be as epic as our minds have already played it up to be before we’ve even got there. And it was epic. Jennifer L. Armentrout definitely delivers.

There is interest and intrigue and excitement and GREAT action and mystery and worries and emotions running high enough to have the reader in tears, and amongst all of those—or maybe driving all of those—are deaths both the characters and readers have to come to terms with, some unexpected and awesomely entertaining additions to the book, battles and fights of the mind, heart and body, redemption, love, amazing character development … and that ending.

Because everyone knows we can’t just go through that epic battle and everyone jumps up and shouts ‘Ta-da! The end!’ Every reader who’s been following this series knows what the outcome is supposed to be for the God Killer. Right? So, I headed through this book dreading that moment. Because my thoughts were spiralling: if JLA goes through with this, then we’re going to end up with dead people we don’t want to be dead; if she doesn’t go through with this, the reader is going to be mad about the contriteness of making it not so—talk about convenient!; aaaaaaaaaaargh, how the hell can this end, other than badly?; ooooh, maybe this’ll happen, maybe she’ll play it this way, maybe, maybe, maybe … so, as you can tell, I pretty much drove myself nuts. Because the closer the reader gets to this point, the more the outcome begins to look pretty bleak.

Well, I’m not stating in my review what does actually happen. Or how Jen actually ends it. However, I willsay that I kind of hit the nail on the head with one of my musings, but at the same time, I was also very wrong. Sure, the ending is somewhat bittersweet, but it’s definitely more sweet than bitter and it definitely left me crying over those last 30 pages, but despite those tears, it definitely left me with a big smile on my face.

To sum up: Sentinel is a phenomenal closure to the Covenant series that will grab you by the coattails and not let you go until you’ve reached the very end, where it will spit you out the other side feeling wholesome enough to drown out the sadness you know you’re going to feel at having to walk away from characters you love. Though, I doubt I’ve said my goodbyes forever, as this is definitely a series I’d be happy to pick back up time and again.